The Cryptic Degrees are a set of three degrees controlled by the Select Masters Council. The degrees get their name from the reference to a hidden or secret vault in the degrees, hence the term Cryptic. Only the first two degrees are regularly worked, the third degree, that of Super Excellent Master, is worked as an honorary degree, not being required as a requisite for membership in the Council. It is also somewhat peculiar in its association with the Cryptic degrees, as it is more closely allied in theme and character with the Royal Arch and the Illustrious Order of the Red Cross. The history of the body as a whole is also shrouded in uncertainty and controversy. Though there is early evidence of Councils of Royal and Select Masters being worked in the United States, the degrees were worked variously by their own Councils, Royal Arch Chapters, and even Lodges of Perfection of the Ancient and Accepted Scottish Rite. Though the Scottish Rite has long relinquished any claim to these degrees, several Grand Jurisdictions (VA & WVA) still confer them as a part of Capitular Masonry. In England, the degree of Most Excellent Master is grouped with this body. In the United States, all business is conducted in the Select Masters Council, the other two bodies only being opened for the conferral of degrees. Some jurisdictions hold “table councils” in similar manner to “table lodges” as a social focal point of their local York Rite bodies. 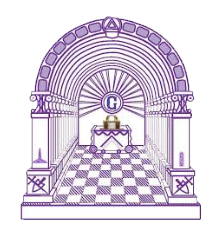 A Degree emphasizing the lessons of patience and fortitude. The Degree centers around the Fellowcraft Masons who were artificers fabricating the fittings and furniture of the Temple. It is unusual in that the first part of the Degree depicts events taking place before the death of the Grand Master Hiram Abif, and the last part depicts events occurring after his death.

A Degree emphasizing the lessons of devotion and zeal. The Degree centers on the construction and furnishing of a Secret Vault beneath the Sanctum Sanctorum of the Temple, and the deposition of those secrets pertaining to the Craft by the three ancient Grand Masters of the Craft. This Degree bridges the events surrounding the concealment and loss of the Ineffable Word and the events leading to the recover of the Word in the Royal Arch Degree. The presiding body is a Council, and the presiding officer is a Master (titled Illustrious).

A Degree emphasizing the lessons of loyalty and faithfulness. The Degree centers around the events leading to the destruction of Jerusalem and the Temple at the hands of the Chaldeans. The Degree is narrated by small interludes of biblical prophecy that highlight the end of the first Temple and the construction of the second Temple. It is noteworthy for its scenes of the Jewish court of Zedekiah and the Chaldean court of Nebuchadnezzar. This degree is an honorary one, and a member of the Council not needing to have it in order to hold membership or office.